Reach For the Moon 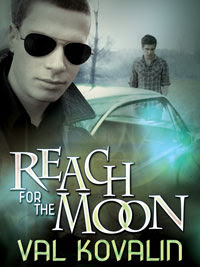 Book Blurb: Christmas vacation 1984 is far from festive at the house of eighteen year-old Alejo Sandoval. His parents teeter on the verge of divorce. His final semester of high school looms ahead. He has just found out that his trickster cousin Martin has vanished, leaving no traces behind. And he keeps a secret that could destroy his place within his religious Hispanic world—he and his best friend Bobby Gallegos are lovers.

Independent and exasperating, Bobby is the love of his life. There is no one Alejo would rather have at his side when his mother and aunt send him on a road trip to unravel his cousin’s mysterious disappearance. But what starts as an excuse to get out of Albuquerque and enjoy a romantic road trip soon takes on serious overtones. Martin might have endangered his life by coming out as gay.

Their short fact-finding mission turns into a quest for Martin’s whereabouts through the secretive small towns of New Mexico. Stress and speculation have set Alejo’s eccentric relatives against each other, and Alejo and Bobby are about to walk into the crossfire.

Buy links coming soon.
Buy at Amazon.com
Buy at All Romance Ebooks in your ebook format of choice.

Email ThisBlogThis!Share to TwitterShare to FacebookShare to Pinterest
Labels: *my fiction

Other places of interest ...

My WEBSITE.
My author page at Amazon.com
My Goodreads.com page
BellaOnline Fiction Writing topic.
Facebook
You can reach me at veekay2000 [at] gmail [dot] com